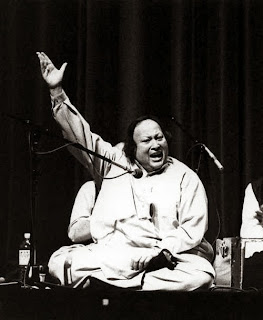 As you might have read in the news or seen on CNN at the time, mid-August of 1997 was the occasion of a very rough week for me. Nusrat Fateh Ali Khan, my favorite musician in any genre, and the person with whom I most wanted to study music, took ill in London on Monday, August 11, 1997, while on the way to Los Angeles from Lahore, Pakistan to receive a kidney transplant. While still at Cromwell Hospital in London, Nusrat died of sudden cardiac arrest on Saturday, August 16, just before noon, Greenwich Mean Time. I first read the news in both the Seattle Times and the New York Times the following morning; by that time, his body had already been returned to Pakistan, where thousands of distraught people attended his funeral and burial procession.

Over the next few weeks, after the initial shock had sent a massive chill down my spine, I actually felt strangely calm much of the time, which I really did not understand. I did not become severely depressed or hysterically upset, as I had anticipated from something like this. There were times, however, when I honestly did not care if I died myself; and many times during the following year when I exploded with furious anger at God, demanding that Nusrat be returned to us immediately, demanding the restoration of all my dreams that had been ripped away from me for no reason. This was a person whom I wanted to know a lot better than I had, someone I wanted to learn from and perhaps to work with professionally. I had a good many hopes, dreams and life goals that involved him and other international musicians. Nusrat was the heart and soul of the world music community, a community that I have long wanted to belong to myself.

Many people have said that Nusrat died at age 48 because he did not take proper care of his health and physical condition; but I have it on good authority (and from firsthand observation) that he was making a good effort to do so during the last few years of his life. On his last North American tour, he had a personal physician with him much of the time, and kept to a very controlled diet emphasizing low fat content in an attempt to keep his diabetic condition under control. When I last saw him in August 1996, he looked much better than he had the year before, and was in terrific spirits besides. I will never forget going up to meet him during the concert intermission (wearing a finagled crew-badge sticker to get me past security), and having him reach out and grasp my hand, looking straight into my face with his dark eyes shining so brightly that they nearly blinded me; they were all I could see for a few seconds.

One problem he always had, though, was that he was driven to keep working, traveling and performing, even when his health was not good. He kept up a tremendously heavy touring schedule almost consistently from the late 1980's on, which would likely burn out even a younger person in good physical condition. He could not seem to say no to performing and recording requests, and his managers did not always advise him particularly well. He always said, moreover, that he was not afraid of dying.

During the summers of 1995 and 1996, I was closely involved in local organizing and promotion of Nusrat's performances with his group here in Seattle, which he considered a kind of North American "home base" since he had taught at the University of Washington as a visiting artist-in-residence during the 1992-93 school year. This was the project in which I learned the basics of concert promotion, without any real background in that field. I worked doggedly for months as a volunteer publicist (on top of a full-time job) writing and mailing press releases, display ads and flyers, and blanketing Seattle with flyers and posters wherever I was allowed to tape, staple or pin them.

After Nusrat's death, I was placed in the position, once again, of gathering and disseminating information about him to people on a completely voluntary basis. After I broke the news to a local world music deejay, he asked me to come into the station and co-host a special tribute program in Nusrat's memory, with mostly traditional qawwali tracks being played, and the host interviewing me for reminiscences. The program aired on Monday, September 15, 1997 on KBCS-FM. I was also contacted online by other fans in different places who had seen my tribute articles on the Internet; for example, I corresponded several times with a man in Durban, South Africa who had seen my concert reviews and other articles that I contributed to Nusrat's official website. Some Pakistani-American friends and I attempted to organize memorial events locally, discussing anything from a large public "wake" to a private video party at someone's house. Unfortunately, due to conflicting schedules, we were not able to get together on anything specific, and I was left to hold my own solo memorial ceremony at my church, lighting candles and writing a kind of eulogy in a hand-written journal. We also heard from Nusrat's Seattle cousins that his nephew, Rahat Ali Khan, formally assumed the leadership of their ensemble as Nusrat took over in 1971 from his late father and uncle. I have not seen Rahat here in Seattle since Nusrat's last concert here on August 17, 1996; but I have been involved since then in the promotion of a younger group, Rizwan-Muazzam Qawwali, under the leadership of Nusrat's nephews and former students, Rizwan and Muazzam Mujahid Ali Khan. [UPDATE: Rahat Ali Khan made a triumphant return to Seattle in July 2001; see our review of that concert on a separate page.]

When I interact with these young artists and other musicians from the Subcontinent, I still get flashbacks of memory: the first time I saw Nusrat, as he walked down the hall of the UW music building toward his classroom in February 1993, accompanied by his tabla player, Dildar Hussain; myself dancing wildly in the orchestra pit of Seattle's Paramount Theatre during their concert in December 1993, and seeing him walk toward the pit when the concert had ended, looking down at the bunch of us with a huge, ecstatic grin that wouldn't quit; sharing dinner parties with him and his entire group both before and after the 1995 and 1996 concerts (one of which was at Nusrat's cousin's apartment in North Seattle, where a long line of us attempted to squeeze into a small living room, and spilled out onto the back porch where kebabs were roasting on a grill); and, most of all, being able to converse with him several times in English, and experiencing his humble and down-to-earth quality firsthand--he hardly ever talked about himself, but he loved to speak with other musicians, and would ply you with questions about what genre of music and what instruments you played, which was your best instrument, and who you thought was the best group now playing in your musical style (traditional Irish music, in my case). He was a very quiet person as a rule, and usually spoke in a half-whisper when he spoke at all, but he would listen to you intently when you discussed musical subjects, responding most often with grins and nods and different expressions centered in his eyes.

Still, while it is great that I have vivid memories of interacting with a musician whom I loved, respected and cared about so strongly, I miss him terribly; and so many musical dreams I had have been stolen from me and destroyed so senselessly. I was very serious about wanting to work with Nusrat on a professional basis. I had many ideas about blending his music with traditional Celtic music in some fashion; and for this reason I tried to learn as much about qawwali music and Sufi philosophy as I could from reading and listening to recordings and videotapes, even when I couldn't be in direct contact with him or other Sufi musicians. When I met him and his group the day before their Seattle concert in 1995, I gave him two cassettes as an early birthday present: one by a local Native American flute player, and a live concert tape by Makem and Clancy (my favorite Irish musicians). He told me later that evening that he had listened to them while some of us were out shopping for him up in Lynnwood, and that he had especially enjoyed the Irish tape. He asked me a number of questions about Ireland and Irish musicians; and in August of the next year (the last time we spoke), he mentioned that he had bought a number of Irish albums since then on visits to the UK. He had already been introduced by Ry Cooder to members of the Chieftains group some time before that. He listened avidly to all kinds of music, from Indian classical to western opera to Bruce Springsteen, and announced in 1996 that he was looking for a good jazz vocalist to collaborate with. Most importantly, to worship God through music was the primary aim of his entire life.

But now I am left with many precious dreams of music gone up in smoke. Sometimes it seems that nothing I want to do works out, that it is useless to have any creative dreams, goals and aspirations, because our society (and perhaps even fate) just doesn't support people with an artistic calling. Part of the problem is my own negative inner voice that discourages me so often from pursuing and realizing these dreams, even though I know plenty of other people who do just that without too much of a problem. My own family have not been much help either; whether well-intentioned or otherwise, most of my relatives have tried to discourage me from professional musicianship, perhaps unaware that music is a high and blessed calling and my greatest love, and I simply cannot sacrifice it to fit into the mainstream corporate world like everyone else. No other work that I do means anything to me except for the paychecks, and I cannot live for that alone. Some family members speak disparagingly of my supposedly selfish desire to "do my own thing", as though dedicating myself wholly to music and creative work is somehow equivalent to being a drug dealer or peddling sex on the streets of Seattle or Tacoma. This is outrageous nonsense, and that sort of discouraging attitude is what is truly selfish and life-denying. A calling to music or other arts is many people's form of service to the world, and artists need the full moral support and encouragement of the people closest to them; my spirit has been crushed and smothered for so long without this that I feel like I have been slowly dying for years from the inside out.

Nusrat Fateh Ali Khan was fully engaged in realizing the vocation that he had, and he was fully supportive and a positive influence on many other artists as well. I know that I would feel more fully alive and inspired today if he was still on this plane, and if I could be in touch with him regularly. During the several times I met him, I would often notice him sitting and humming to himself, in his own musical world, even in the midst of a throng of people all talking at once in Urdu. He seemed to be trying to show me that, for a musician, this is completely normal behavior. Today, when I find myself sitting or walking in crowds of unsmiling professionals while humming to myself and incubating new songs in my head, I hope very much that I am not alone while so doing.